Completed in 586, the Rabbula Gospels is simultaneously one of the finest Byzantine manuscripts produced in Asia as well as one of the earliest Christian manuscripts to be furnished with large miniatures, which are distinguished by their bright colors, dynamism, drama, and expressiveness. Elaborate floral and architectural motifs frame the miniatures, which include the oldest surviving depiction of the Crucifixion found in a manuscript and shows the contemporary Eastern form of the image. The Syriac manuscript was produced in the scriptorium of the Monastery of St. John of Zagba in modern day Syria and is one of the few specimens to survive the destruction of countless Byzantine manuscripts and works of art during the Iconoclasm of the 8th and 9th centuries. This precious artifact is named after the scribe Rabbula, who signed his name in the manuscript and about whom nothing else in known. Parts of the manuscript were overpainted by restorers and miniatures from other works were added in the 15th and 16th centuries.

This famous 6th century manuscript is distinguished by its age, rarity, and the art-historical significance of its miniatures, which are clearly the work of an experienced artist. Its text consists of the Peshitta version of the Syriac translation of the Gospels, which is written in two columns using dark brown, black, and red ink. Eight full-page miniatures illustrating the text are brightly colored, dynamic, dramatic, and expressive. They represent rare and precious artifacts of Byzantine art that managed to survive destruction at the hands of Iconoclasts and provide an example of Late Antique art from the Eastern Mediterranean. Finally, the codex also served as a register of the Maronite patriarchs of Antioch during the Middle Ages. The Rabbula Gospels thus represents a true “triple threat” for bibliophiles.

A Mix of Artistic Traditions

Aside from being one of the finest Byzantine manuscripts originating in Asia, the manuscript is significant for being one of the first to be furnished with large miniatures. They are the work of an anonymous professional artist trained in the classical illusionist tradition who also borrowed from Hellenistic art, especially the draped figures, as well as Persian artistic traditions. Some miniatures are framed by elaborate floral and architectural motifs, others by colorful patterns including zigzags, curves, and rainbows. Its canon tables are presented in arcades with flowers, birds, animals, and marginal miniatures of biblical scenes. The Crucifixion miniature is the oldest found in an illuminated manuscript and is an example of the Eastern archetype of the image. It also features an extremely rare miniature of the Apostles choosing a new member to replace Judas, a scene not founded in the Gospels but mentioned in the Acts of the Apostles. These images are treasured by art historians as rare examples of the style and iconography of the period.

Signed by the anonymous scribe Rabbula, the Gospel Book is believed to have been made in the Monastery of St. John of Zagba and completed in the year 586. Its original size is not known because it was trimmed when it was rebound several times over the centuries, but the folios currently measure 34 x 27 cm. The fate of the manuscript between the 6th and 11th centuries is not known, including how and why it survived the Iconoclasm when so many other illuminated manuscripts did not. It was recorded as being in Maipuc-Byblos, Lebanon in the 11th century before coming to Quannubin in the Kadisha Valley around the turn of the 14th century. The Maronite Patriarch brought the manuscript to its current repository, the Laurentian Library in Florence, in the late-15th or early-16th century. Recent scholarship suggests that the text and miniatures were originally separate volumes that were bound together in the 15th century. Commentary: 1 volume by Carlo Cecchelli, Giuseppe Furlani and Mario Salmi
Language: English
1 volume: This facsimile is not complete. Reproduction of twelve pages (miniatures and four text pages) of the original document as detailed as possible (scope, format, colors). The binding may not correspond to the original or current document binding.
Price Category: € (under 1,000€)
Edition available
Price: Log in here!
Order / Ask a Question
You might also be interested in: 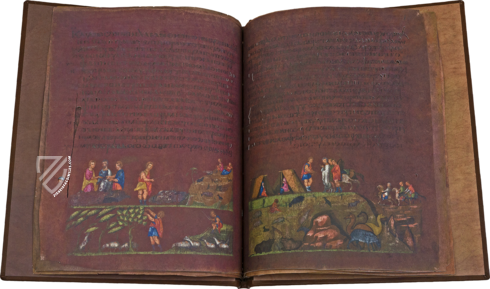 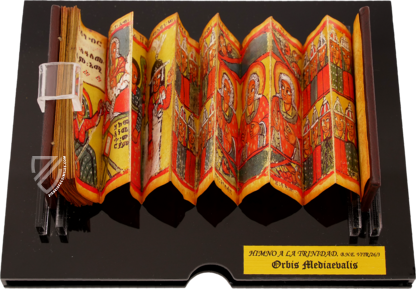