One of the most beautiful and splendidly colored accounts of the Ottoman Empire is housed today under the shelf mark Ms. or. 9 in the State and University Library of Bremen. Filled with richly detailed depictions of a royal procession, it portrays the dress of the Turks and the various peoples subjugated by them. The codex was hand-painted in 1574 by Lambert de Vos, the painter of the Hapsburg ambassador in Constantinople, Karel Rijm. Written at a time when the "Turkish Threat" to Europe was at its greatest, the manuscript actually reflects the tremendous degree to which Orient and Occident influenced one another during this period. Reflecting all strata of society, this is a valuable source for cultural and art historians alike.

The Costume Book of Lambert de Vos represents the fusion of the Orient and the Occident and contains valuable information regarding the design and clothing customs of people during the 16th century. This codex holds a unique place amongst the preserved costume books that exist because it was hand-painted in 1574 by Lambert de Vos, the painter of the Hapsburg ambassador in Constantinople, Karel Rijm.

103 Pictures of the Dazzling Splendor of the Ottoman Empire

This rich album captivates one with its high level of artistic quality. There are 103 large-sized pictures altogether showing the stringently defined hierarchical order involved in the ceremonial horse ridden procession of the sultans. This procession was highly-stylized under Suleiman the Magnificent and represented the manifestation of the splendor and glory of the Ottoman Empire. The sultans' entourage was ranked according to a social class system: religious and secular dignitaries, men and women of middle class, lower class members and provincials. The vibrantly colorful Costume Book of Lambert de Vos not only gives one a view of the dress and fashion found within the Ottoman Empire, but additionally provides one with an overview of the hierarchical arrangement of community and of a society strongly influenced by the West. 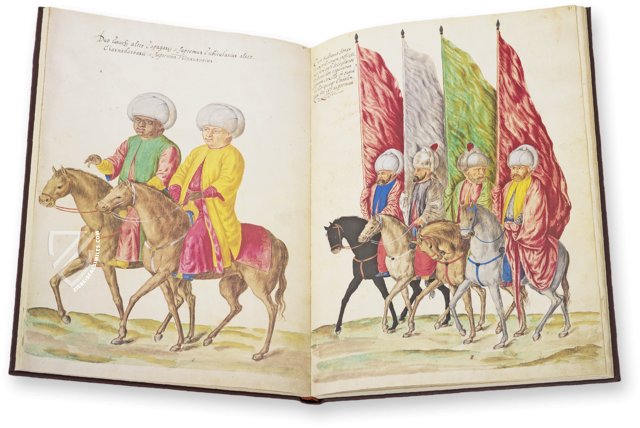 Banner Bearers in the Sultan’s Procession

The Ottoman sultans ruled over a polyglot empire spanning North Africa, the Middle East, and Eastern Europe that was largely held together thanks to a complex imperial hierarchy and class system. This hierarchy was directly represented by the sultan’s ceremonial precession on horseback through the streets of Istanbul, formerly Constantinople. Under Suleiman the Magnificent, this procession was a grand pageant that represented the splendor of the empire when it was at its zenith. 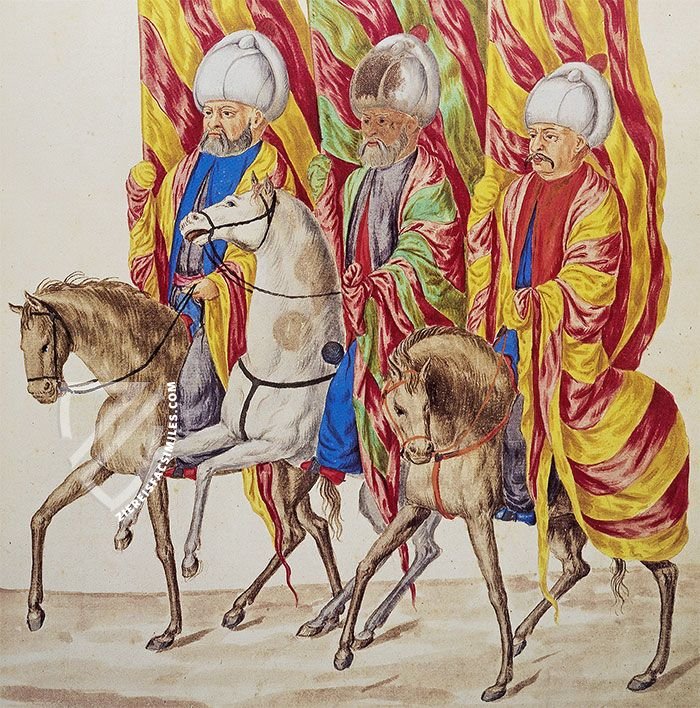 The Bulgars were a nomadic Turkic people who settled along the steppe of the lower Volga during the 7th century and gradually moved west. They had a complex relationship with the Byzantines, initially acting as some of their greatest allies in the West, but later found themselves to be enemies of Constantinople. Conquered by the Turks in 1396, Bulgaria would not be independent until 1908.

This is a rare depiction of two women in floor-length dresses because they are commoners and Muslims to boot. One is holding a basket of eggs and has a more olive-complexion, while the one holding the flatbread is fairer – a reflection of the polyglot mix of Turkic, Iranian, Slavic, Thracian, Greek, and other peoples living under the Bulgari warrior elite. 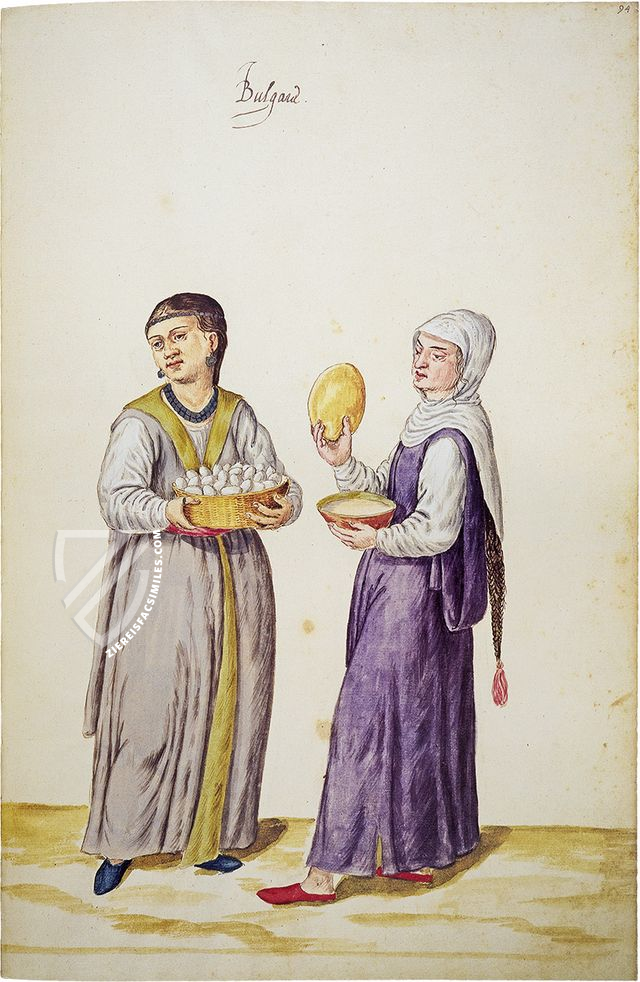 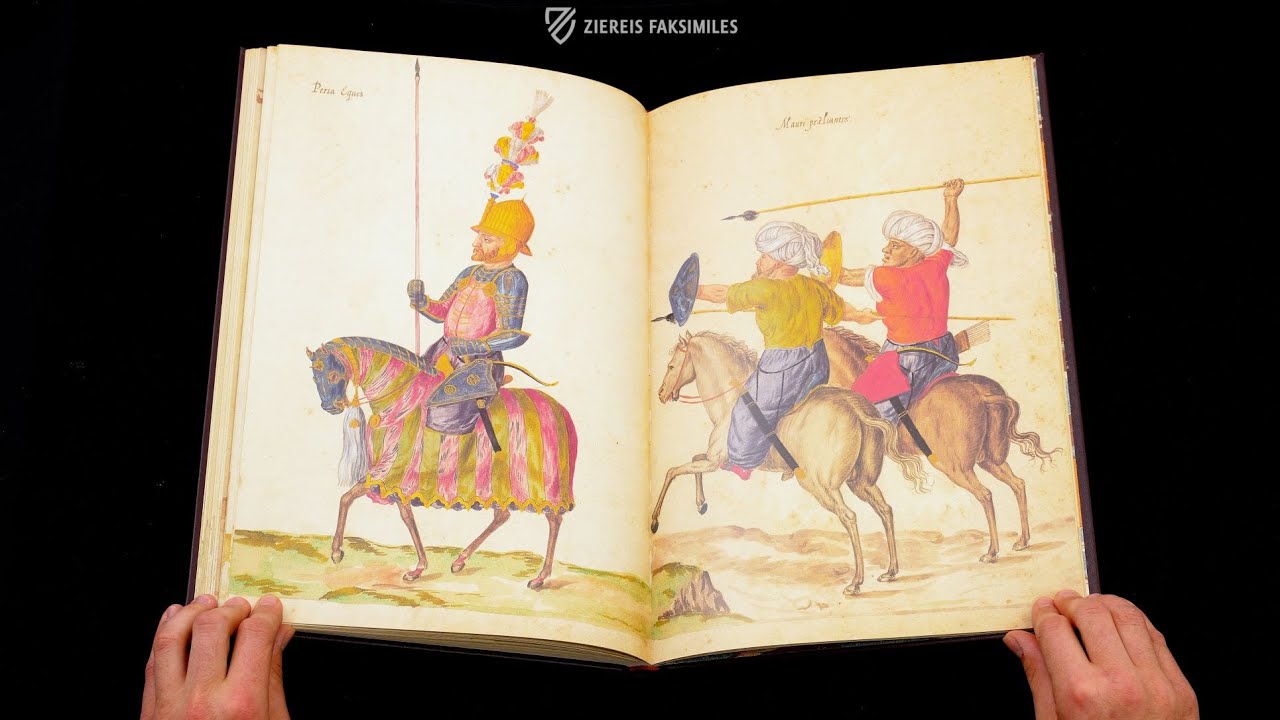 From one of the most talented architects of the Renaissance: drawings of architecture and designs for machines in a beautiful sketchbook