Martyrologies were popular devotional texts that allowed the faithful to contemplate the deeds and deaths of prominent Christian martyrs, as well as providing medieval artists with material for their miniatures that ranged from the divine to the gruesome and so pushed their creative boundaries. Although these Vitae were usually devoted to just one saint, they sometimes focused on two, such as in the case of the Passio Kiliani et Margaretae. Saint Kilian was an Irish monk who met his martyrdom in 7th century Franconia, while Saint Margaret from Antioch was martyred in the 4th century during the persecutions of Diocletian. The overall decoration is of such high quality and luxury, including sumptuous golden miniatures that we may rightly assume that the codex was made on request of the Ottonian court, probably in Fulda ca. 975.

This manuscript constitutes a unique testimony to early medieval book production. Here, we encounter for the first time the book type libellus, a "small book" usually dedicated to the life of a saint. In this rare case, the book deals with two saintly persons, whose lives and deaths are recounted in the manuscript and illustrated with numerous miniatures. One of them is the Vita Kiliani, telling the story of Saint Kilian, an Irish bishop who spread the Christian faith in Franconia. He was active in Würzburg around 680 and confronted the ruling class with Catholic ethics and the canon law, thus sealing his martyrdom. Saint Margaret also died as a martyr. She was among the most highly venerated saintly women, both in the Occident and the Orient. Legend has it that she was born in Antioch and lived at the peak period of Christian persecution under the Roman emperor Diocletian (early 4th century). When she refused to renounce her faith, she was tortured and finally beheaded.

The most important episodes in the lives of both Saints are illustrated in 21 sumptuous miniatures with gold leaf. However, the richly embellished initials and interlaced bands also draw the viewer’s attention. The overall decoration is of such high quality and luxury that we may rightly assume that the codex was made on request of the Ottonian court, probably in Fulda. The Passio Kiliani et Margaretae was executed in 975 and thus ranks among the most impressive testimonies to the magnificent art of illumination practiced in the era of the Ottonian kings. 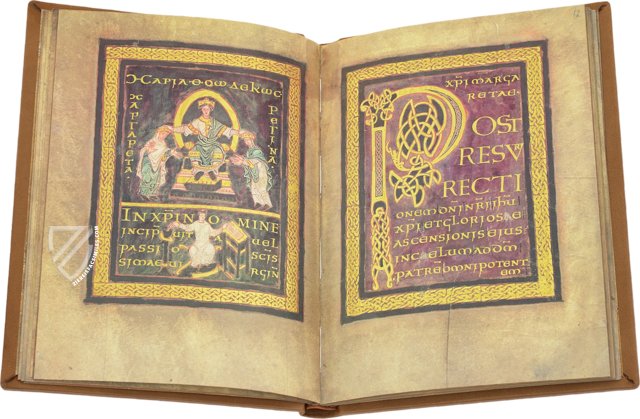 After leaving Ireland in the Summer of 686, Kilian and eleven companions travelled to Rome via Gaul. There, Pope Conan consecrated Kilian as a bishop and commissioned him to lead a mission to Franconia. Gold leaf and rich shades of green and purple elegantly color the scene, which shows figures standing around an altar in the foreground. It may be an attempt by the artist to depict an interior scene while implying its location behind the walls and within the palace of the Vatican. 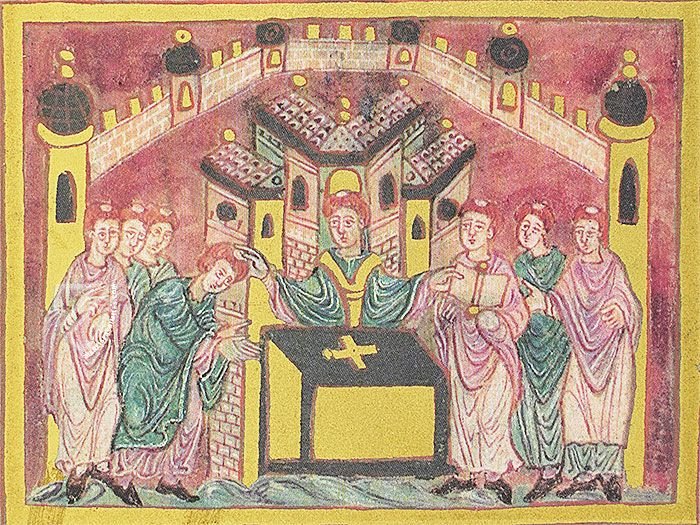 Corontion of the Martyrs Margaret and Regina

Margaret of Antioch is a widely venerated saint who consecrated her virginity to God, then refused to marry the Roman Governor and renounce her faith. She was tortured and executed for this crime, but not before performing many miracles and as such, it is said that her indulgences and intercessions are very powerful.

Labelled and standing to the left, Margaret is shown receiving a crown from the Virgin Mary, who is enthroned and framed by a mandorla, as another saint named Regina is crowned on the right. Either the scribe or the author of the text is shown in the lower register sitting between a writing desk and a stand with an inkwell. The dark background of the page contrasts beautifully with the interlace frame of gold leaf. 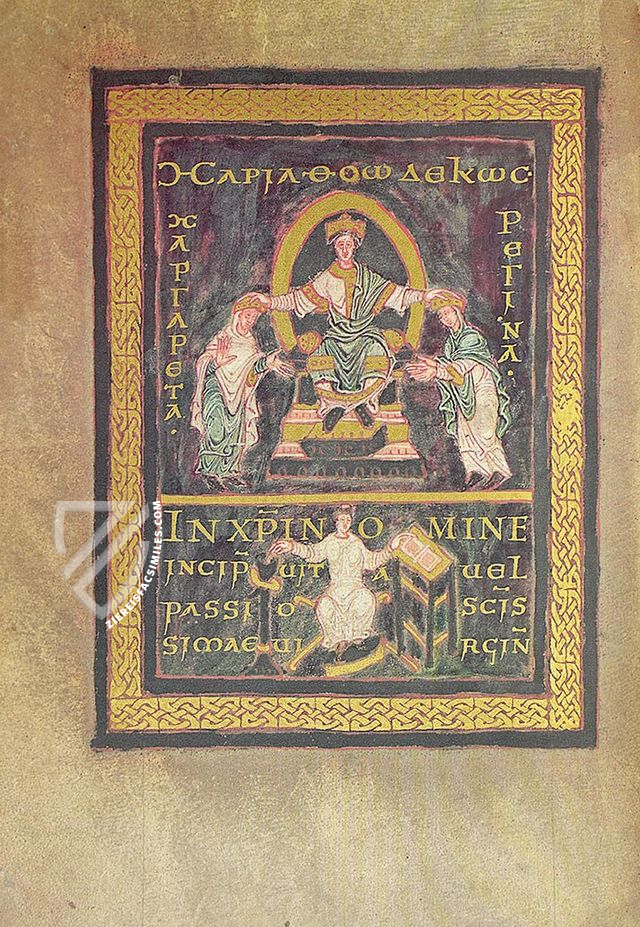 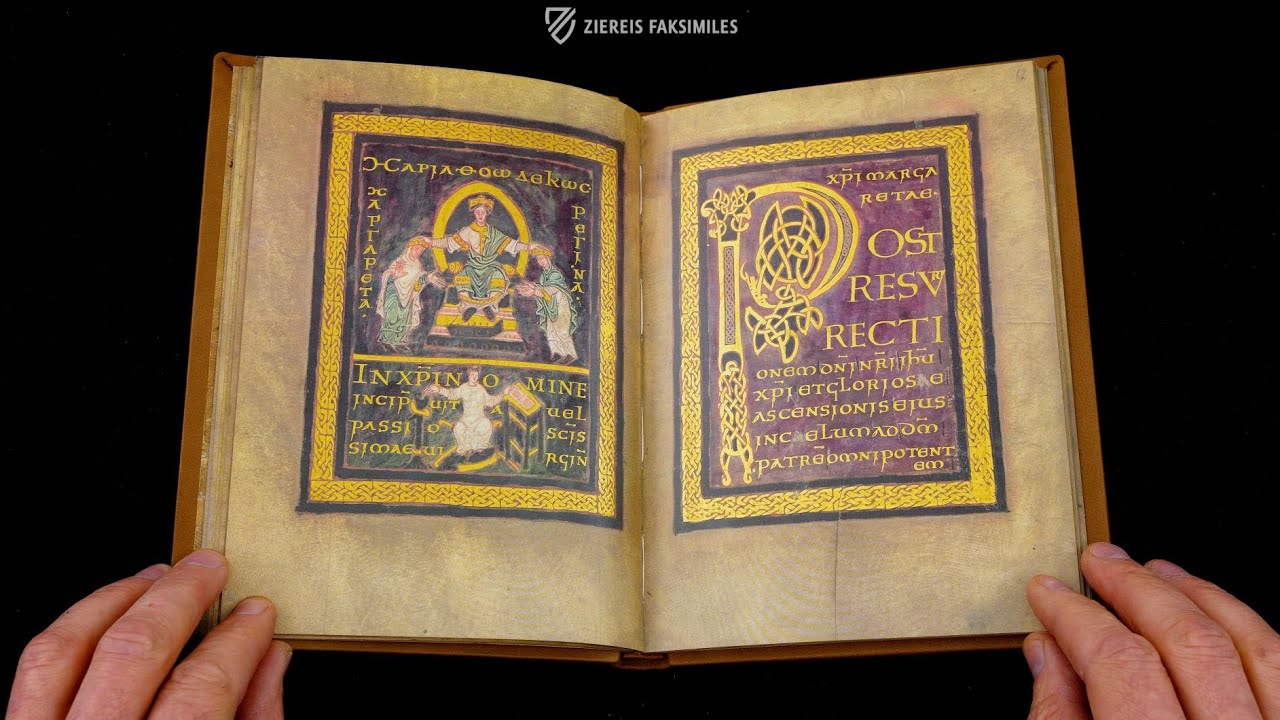 Codicological, iconographical and art historical introduction (in English) by Cynthia Hahn, Florida. Transcription, translation into German and liturgical introduction by H. Himmel, Hannover, preface by William Totok.
1 volume: Exact reproduction of the original document (extent, color and size) Reproduction of the entire original document as detailed as possible (scope, format, colors). The binding may not correspond to the original or current document binding.
Price Category: € (under 1,000€)
Edition available
Price: Log in here!
Order / Ask a Question
You might also be interested in: 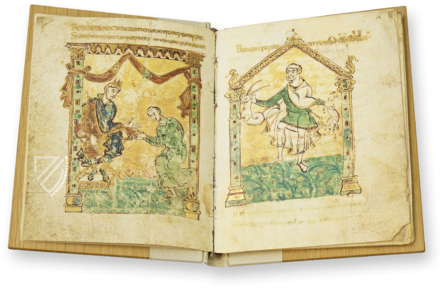 Martyrologium of Wandalbert of Prum
Monastery of Reichenau (Germany) – 848–855

A Carolingian masterpiece: the life and martyrdom of the saints together with depictions of everyday rural life in the 9th century 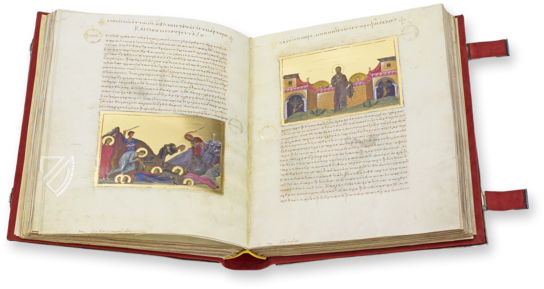 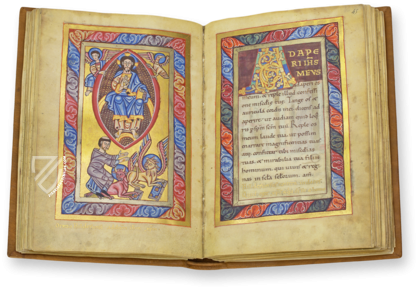 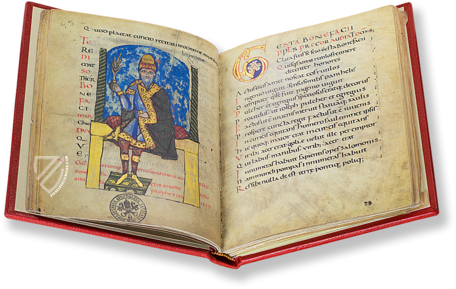 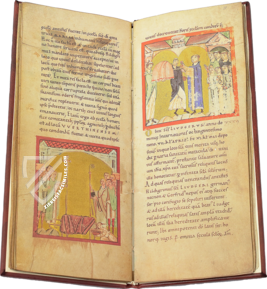 Alcuin as teacher, Charlemagne as Lord: the life of Saint Liudger in one of the oldest medieval hagiographies 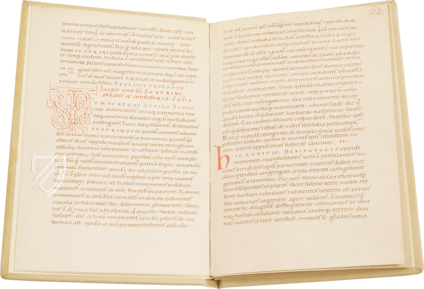 The life and work of the missionary who was active in Bavaria and Austria: an invaluable historical source on the tumultuous decline of the Western Roman Empire and the Migration Period